Prof. Andreas Manz is one of the pioneers in the development of microchip technology. About two decades ago he was involved in the development of the novel concept for Miniaturized Total Analysis Systems (µ-TAS), which integrated sampling, sample pre-treatment, separation, and detection was performed in a single microsystem, allowing the periodical monitoring of a chemical parameter (for example, quantitative analysis) by electronical or optical signalling. 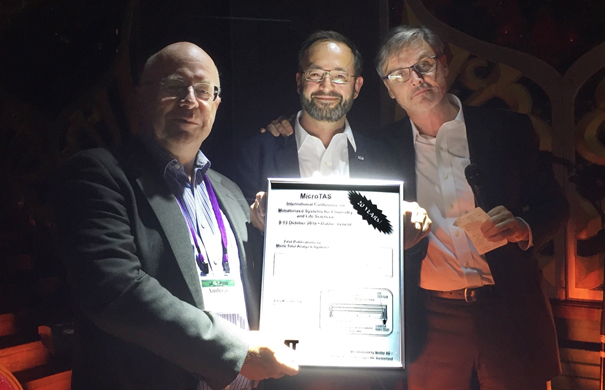 Initially, the main reason for miniaturization was to enhance the analytical performance of chemical sensors rather than to reduce the device in size. However, it turned out that size reduction presents an ultimate advantage of costs savings as smaller consumption of the analyte as well as reagents are needed. Moreover, the integration of separation techniques enables faster time-to-results through parallel monitoring of many components. Thus, such systems are capable of performing sample handling, analysis, and detection within a single device.

IMT AG is the provider of leading edge BioMEMS technology transferring the microfabrication know-how originally developed for microelectronics (MEMS) into flexible and scalable solutions for the manufacturing of micro- and nanostructures in glass for consumables in life science applications and components in medical instruments and equipment.

With more than 50 years of experience in the fields of optics and metrology IMT AG is well positioned in the intersection of microfluidic and photonics to act as a development partner, as well as a large scale manufacturer of glass consumables for microfluidic and biophotonic applications.